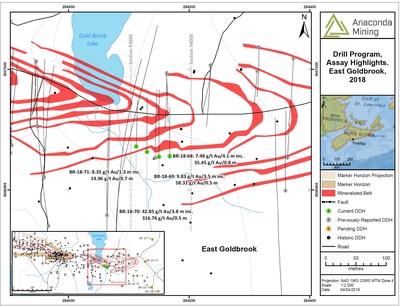 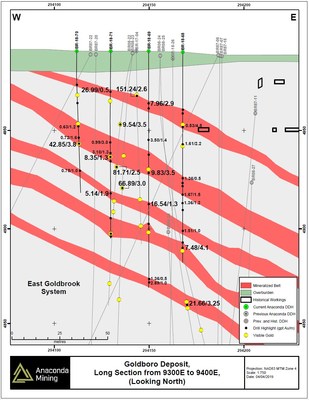 Selected composited highlights from the Metallurgical Drill Program include:

A table of selected composited assays from both recent and previously reported drilling are shown in the table below.

"These drill results are important as they provide confidence in the existing resource and geological models of the EG Gold System, confirm the continuity of grade for several of the high-grade zones encountered in previous drilling, and provide the samples necessary to advance metallurgical testing to support a Feasibility Study at Goldboro. The results are consistent with those we have encountered in other areas of the EG Gold System and will be incorporated into an updated mineral resource estimate, which will include 10,000 metres of drilling conducted since July of 2018 and is expected to be released by the third quarter of 2019. In the meantime, we continue to work on an additional 5,000-metre drill program to better outline high-grade zones in the EG Gold System, expand the deposit, and infill specific portions of the EG and Boston-Richardson Gold Systems."

Selected composited highlights from previously reported drill results (see Anaconda press release of May 21, 2018 and Orex Exploration press releases of January 30 and March 24, 2009) in the immediate area of the Metallurgical Drill Program include:

Mineralized intervals from the Metallurgical Drill Program assaying greater than 0.5 g/t gold were composited and sent for analysis to BASE Metallurgical Laboratories Ltd. of Kamloops, British Columbia. A separate sample collected from the Boston-Richardson Gold System during the recent underground bulk sampling program was also composited as part of a larger metallurgical sample (the "Metallurgical Sample"). The Metallurgical Sample is being used in a suite of tests designed to better characterize the recovery and milling properties of mineralization and to optimize the process flow sheet as part of the ongoing Feasibility Study.

Samples analyzing greater than 0.5 g/t Au via 30 g fire assay were re-analyzed at Eastern via total pulp metallic. For the total pulp metallic analysis, the entire sample is crushed to -10mesh and pulverized to 95% -150mesh. The total sample is then weighed and screened to 150mesh. The +150mesh fraction is fire assayed for Au, and a 30 g subsample of the -150mesh fraction analyzed via fire assay. A weighted average gold grade is calculated for the final reportable gold grade. Anaconda considers total pulp metallic analysis to be more representative than 30 g fire assay in coarse gold systems such as the Goldboro Deposit.

Anaconda Mining is a TSX and OTCQX-listed gold mining, development, and exploration company, focused in the prospective Atlantic Canadian jurisdictions of Newfoundland and Nova Scotia. The Company operates the Point Rousse Project located in the Baie Verte Mining District in Newfoundland, comprised of the Stog'er Tight Mine, the Pine Cove open pit mine, the Argyle Mineral Resource, the fully-permitted Pine Cove Mill and tailings facility, deep water port, and approximately 9,150 hectares of prospective gold-bearing property. Anaconda is also developing the Goldboro Gold Project in Nova Scotia, a high-grade Mineral Resource, subject to a 2018 a preliminary economic assessment which demonstrates strong project economics. The Company also has a wholly owned exploration company that is solely focused on early stage exploration in Newfoundland and New Brunswick.