Highlights from this drill program include multiple occurrences of visible gold, and assays of high-grade tenor including the following: 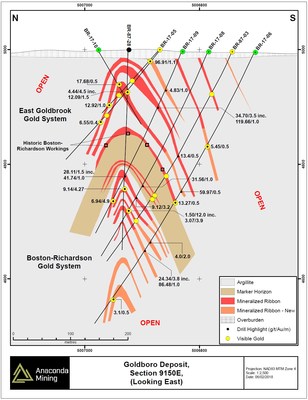 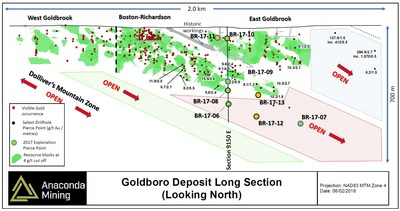 The Company has completed eight diamond (BR-17-06 to 13) drill holes totaling 3,553 metres since the commencement of the drill program in October, 2017. The program focused on a combination of down-plunge exploration and infill drilling on three geological sections of the Goldboro Deposit. Each of the drill holes successfully intersected mineralized zones of both the East Goldbrook ("EG Gold System") and Boston Richardson ("BR Gold System") gold systems, as demonstrated on cross section 9150E (Exhibit A and B), reinforcing the potential for down-dip and down-plunge extension of the Goldboro Deposit. Assays for the first five holes (BR-17-06 to 10) include multiple occurrences of visible gold and assays with high-grade tenor. Assays are pending for drill holes BR-17-11 to 13.

"Anaconda continues to achieve successful results at its 100% owned Goldboro Project, following on from the recently announced preliminary economic assessment, which demonstrates a high-grade, long-life project.  In our first significant diamond drilling campaign at Goldboro, we're hitting high-grade intersections and multiple occurrences of visible gold within new areas of drilling down-dip and down-plunge of the known deposit and have extended the plunge of mineralization by as much as 375 metres. With the expansion of mineralization, the Goldboro Deposit is well positioned to grow beyond the current resource, while infill drilling results generate higher confidence in the known mineral resource as well as finding additional mineralized zones not previously modeled."

Infill drill holes (BR-17-08 to -10) along section 9150E also intersected grades consistent with other high-grade intersections observed in historical holes BR-87-03 and -28, as well as hole BR-17-05 drilled by the Company in mid-2017. These recent drill holes, build confidence in the geological model and are expected to upgrade the resource categorization in this area from Inferred to Indicated Resource categories. Further, a new mineralized zone, not previously outlined in section 9150E, was outlined by intersections within adjacent holes BR-17-09 and BR-17-05 (Exhibit B).

A table of selected composites from section 9150E, including historic and recent drilling, are included in the following highlight table:

Composited Assays from the recent drill program at Goldboro reported in this release are shown below:

All samples and the resultant composites referred to in this release are collected using QA/QC protocols including the regular insertion of standards and blanks within the sample batch for analysis and check assays of select samples. All samples quoted in this release were analyzed at Eastern Analytical Ltd. in Springdale, NL, for Au by fire assay (30g) with an AA finish.

Samples analyzing greater than 0.5 g/t Au via 30 g fire assay were re-analyzed at Eastern Analytical Ltd. Via total pulp metallic. For the total pulp metallic analysis, the entire sample is crushed to -10mesh and pulverized to 95% -150mesh. The total sample is then weighed and screened to 150mesh. The +150mesh fraction is fire assayed for Au, and a 30g subsample of the -150mesh fraction analyzed via fire assay. A weighted average gold grade is calculated for the final reportable gold grade.  Anaconda considers total pulp metallic analysis to be more representative than 30 g fire assay in coarse gold systems such as the Goldboro deposit.

Anaconda is a TSX-listed gold mining, exploration and development company, focused in the prospective Atlantic Canadian jurisdictions of Newfoundland and Nova Scotia. The Company operates the Point Rousse Project located in the Baie Verte Mining District in Newfoundland, comprised of the Pine Cove open pit mine, the fully-permitted Pine Cove Mill and tailings facility, the Stog'er Tight and Argyle deposits, and approximately 5,800 hectares of prospective gold-bearing property. Anaconda is also developing the recently acquired Goldboro Project in Nova Scotia, a high-grade Mineral Resource, with the potential to leverage existing infrastructure at the Company's Point Rousse Project.

The Company also has a pipeline of organic growth opportunities, including the Great Northern Project on the Northern Peninsula and the Tilt Cove Property on the Baie Verte Peninsula.

This news release contains "forward-looking information" within the meaning of applicable Canadian and United States securities legislation. Generally, forward-looking information can be identified by the use of forward-looking terminology such as "plans", "expects", or "does not expect", "is expected", "budget", "scheduled", "estimates", "forecasts", "intends", "anticipates", or "does not anticipate", or "believes" or variations of such words and phrases or state that certain actions, events or results "may", "could", "would", "might", or "will be taken", "occur", or "be achieved". Forward-looking information is based on the opinions and estimates of management at the date the information is made, and is based on a number of assumptions and is subject to known and unknown risks, uncertainties and other factors that may cause the actual results, level of activity, performance or achievements of Anaconda to be materially different from those expressed or implied by such forward-looking information, including risks associated with the exploration, development and mining such as economic factors as they effect exploration, future commodity prices, changes in foreign exchange and interest rates, actual results of current production, development and exploration activities, government regulation, political or economic developments, environmental risks, permitting timelines, capital expenditures, operating or technical difficulties in connection with development activities, employee relations, the speculative nature of gold exploration and development, including the risks of diminishing quantities of grades of resources, contests over title to properties, and changes in project parameters as plans continue to be refined as well as those risk factors discussed in Anaconda's annual information form for the year ended May 31, 2017, available on www.sedar.com. Although Anaconda has attempted to identify important factors that could cause actual results to differ materially from those contained in forward-looking information, there may be other factors that cause results not to be as anticipated, estimated or intended. There can be no assurance that such information will prove to be accurate, as actual results and future events could differ materially from those anticipated in such information. Accordingly, readers should not place undue reliance on forward-looking information. Anaconda does not undertake to update any forward-looking information, except in accordance with applicable securities laws.