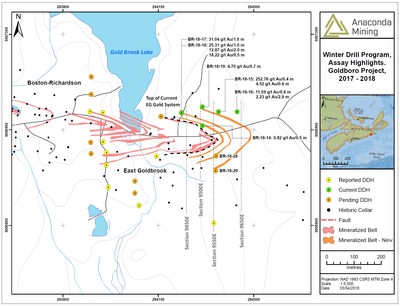 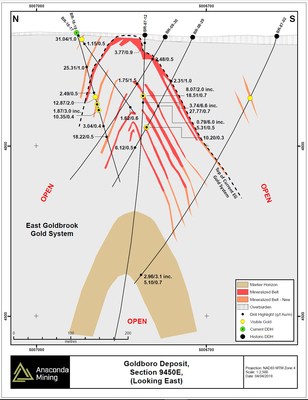 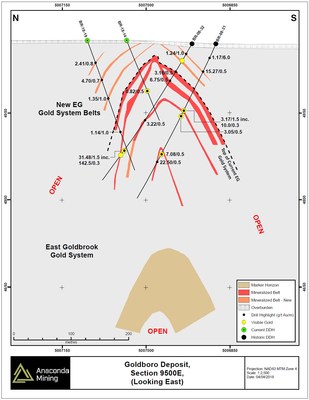 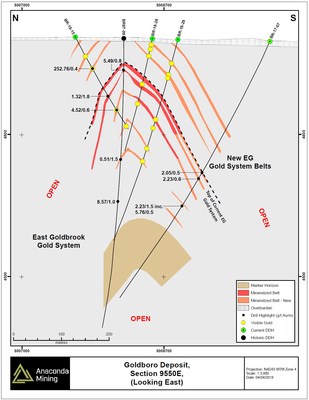 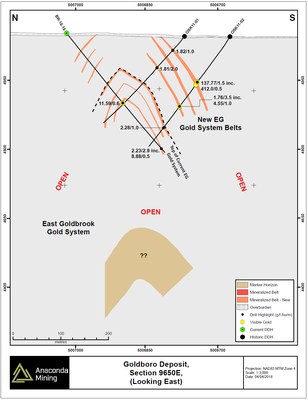 Recent highlight assays of the Drill Program include:

Highlight assays from historic drilling on these same sections include:

In addition to historic assays from these sections, historic results have also intersected 215.74 g/t gold over 3.65 metres in hole OSK 11-04, located 250 metres east of our current Drill Program.

"We are taking a systematic approach to infill and expansion drilling at Goldboro allowing us to assess the geological continuity of the deposit, upgrade the resource model, and discover new zones of mineralization. We are very encouraged that we have been able to replicate similar historical drilling results, and by the discovery of new mineralization east of East Goldbrook, which demonstrates the potential for resource expansion along strike.  Our approach is beginning to provide geological context for previously isolated high-grade assays such as intersections within hole OSK 11-02 located on section 9650E and hole OSK 11-04 located 250 metres east of our current drilling. The Drill Program will continue to focus on expanding the East Goldbrook and Boston-Richardson Gold Systems, and we remain very optimistic about our ability to expand the Goldboro Deposit."

Significant intersections from the Drill Program and selected highlights from historic drilling on 9450E include:

Significant intersections from the Drill Program and selected highlights from historic drilling on 9500E include:

Recent drilling on section 9500E intersected seven mineralized zones, including three new mineralized zones above the previously known extents of the EG Gold System. The down dip extensions of the limbs remain open for further extension.

Significant intersections from the Drill Program, previously reported drill hole BR-18-07 and selected highlights from historic drilling on 9550E include:

Recent drilling on section 9550E intersected eight mineralized zones including three above the previously known extents of the EG Gold System. Hole BR-18-15 intersected the same three newly discovered mineralized zones encountered in the north limb of section 9500E, but with higher grades. The down dip extensions of the limbs remain open for further extension within section 9550E and to the east of this section.

Significant intersections from the Drill Program and selected highlights from historic drilling on 9650E include:

All samples and the resultant composites referred to in this release are collected using QA/QC protocols including the regular insertion of standards and blanks within the sample batch for analysis and check assays of select samples. All samples quoted in this release were analyzed at Eastern Analytical Ltd.("Eastern") in Springdale, NL, for Au by fire assay (30g) with an AA finish.

Samples analyzing greater than 0.5 g/t Au via 30 g fire assay were re-analyzed at Eastern. via total pulp metallic.  For the total pulp metallic analysis, the entire sample is crushed to -10mesh and pulverized to 95% -150mesh. The total sample is then weighed and screened to 150mesh. The +150mesh fraction is fire assayed for Au, and a 30g subsample of the -150mesh fraction analyzed via fire assay. A weighted average gold grade is calculated for the final reportable gold grade.  Anaconda considers total pulp metallic analysis to be more representative than 30 g fire assay in coarse gold systems such as the Goldboro deposit.

Anaconda is a TSX-listed gold mining, exploration and development company, focused in the prospective Atlantic Canadian jurisdictions of Newfoundland and Nova Scotia. The Company operates the Point Rousse Project located in the Baie Verte Mining District in Newfoundland, comprised of the Pine Cove open pit mine, the fully-permitted Pine Cove Mill and tailings facility, the Stog'er Tight and Argyle deposits, and approximately 5,800 hectares of prospective gold-bearing property. Anaconda is also developing the recently acquired Goldboro Project in Nova Scotia, a high-grade Mineral Resource, with the potential to leverage existing infrastructure at the Company's Point Rousse Project.

The Company also has a pipeline of organic growth opportunities, including the Great Northern Project on the Northern Peninsula and the Tilt Cove Property on the Baie Verte Peninsula.