TORONTO, June 18, 2018 /CNW/ - Anaconda Mining Inc. ("Anaconda" or the "Company") (TSX: ANX; OTCQX: ANXGF) is pleased to announce assay results from six drill holes (695 metres), as part of 11,588 metres of diamond drilling completed since October 2017 (the "Drill Program") at the Company's Goldboro Gold Project in Nova Scotia ("Goldboro"). The six drill holes (BR-18-35 to BR-18-40) targeted two specific areas of the Boston-Richardson Gold System ("BR Gold System") as a potential site for a future underground bulk sample and to confirm the existing geological modelling in the area within, and adjacent to, an open pit outlined within a recent Preliminary Economic Assessment ("PEA") filed on March 2, 2018, and available on SEDAR at www.sedar.com and on the Company's website at www.anacondamining.com. 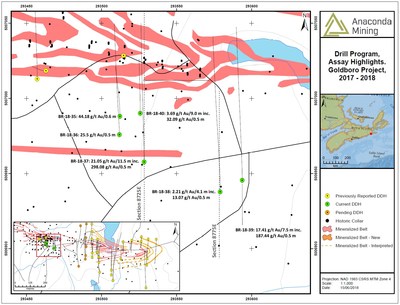 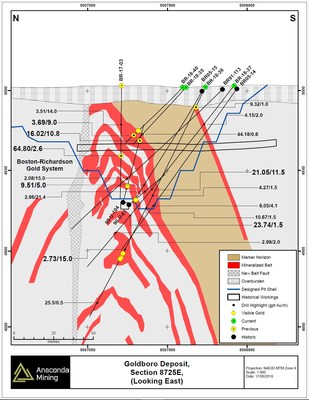 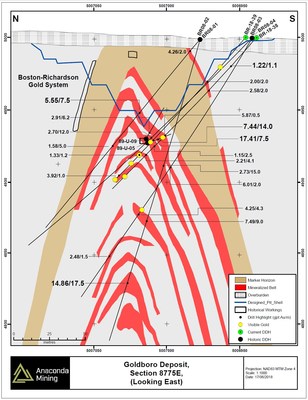 Highlights of the composited assays from the Drill Program on sections 8725E and 8775E include:

The Drill Program was successful in confirming mineralization modelled from previous drilling as well as repeating observations of the geological setting as outlined in previous exploration efforts and in Historical Workings. The drilling also intersected several broad zones of moderate to high-grade mineralization, many of which are within or immediately adjacent to the current open pit design outlined in the recent PEA. Five occurrences of visible gold were also observed.

Select highlights of composited assays from historic drilling on sections 8725E and 8775E include:

A full table of composited assays from recent drilling is presented below as well as intervals from select historic drill holes for sections 8725E and 8775E.

"We continue to get tremendous results from our drill program at Goldboro, demonstrating the significant upside potential of what is already an attractive, profitable development project. The results of the Drill Program validate the resource model in this area of the BR Gold System and demonstrate that the mineralization has significant, double-digit grade and thickness associated with the modelled zones. Of greater consequence is the fact that the multiple, thick zones of mineralization encountered in this Drill Program fall within or near a designed open-pit outlined within the Preliminary Economic Assessment published last winter. Furthermore, the drilling adjacent to the Historic Workings provides the direct observation and information required to complete engineering designs for a future bulk sample at Goldboro, as part of ongoing work towards feasibility."

*Hole BR-17-03 was previously reported in a press release on July 27, 2017. The reported results were based on fire assay alone.  Since then the same sample pulps were reprocessed using total pulp metallic analysis and it is these values that are reported in this press release to be consistent with all other gold analysis conducted by the Company since October of 2017.