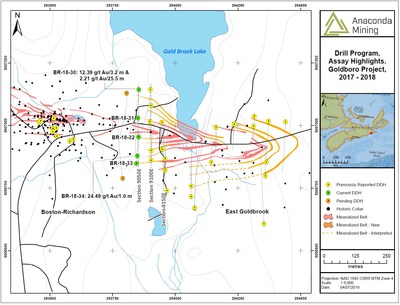 Highlights of the composited assays from the Drill Program on section 9050E include:

A full table of composited assays from recent drilling is presented below.

"The current drilling not only expanded mineralization, but also demonstrated the continuity of wide zones of mineralization between sections along the dominate plunging control on the Boston Richardson Gold System. In section 9050E, we found the continuation of the wide zones of mineralization and faults seen in sections 9100E and 9150E.  Since initiating our exploration programs, which so far have included nearly 12,000 metres of drilling, we have expanded the deposit and continue to refine and increase the confidence in our geological model. In particular, drilling in section 9050E has extended all mineralized zones of the EG Gold System, and further extended the BR Gold System down to 550 vertical metres, an increase of over 250 metres in this section. Over the next several months, we expect to continue to demonstrate the significant growth potential of Goldboro with a substantial exploration program funded by the recent flow through financing."

Recent results from the Drill Program have confirmed historical results which indicated the potential for expansion. Select highlights of composited assays from historic drilling on sections 9050E include:

A table of selected composited assays from drill holes reported in this press release:

Reported mineralized intervals are measured from core lengths. Intervals are estimated to be approximately 80-100% of true widths of the mineralized zones, except for drill intersections below 400 metres depth where the drill trace crosses to the northern limb of the host fold structure near the bottom of the hole.  In these areas reported intervals may be less than 50% of true width.