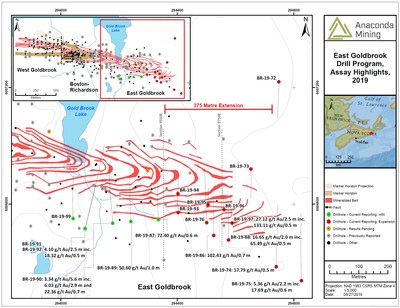 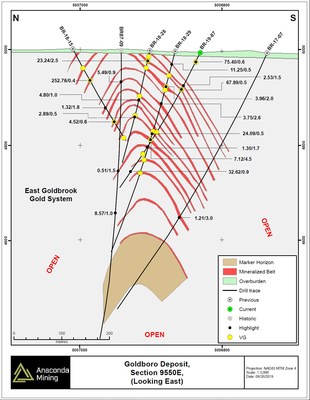 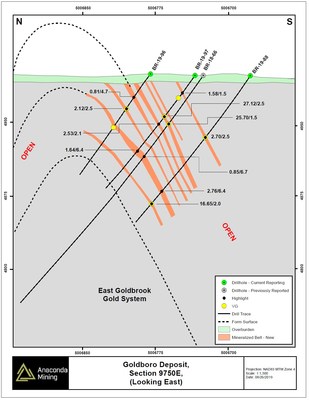 Selected composited highlights from the recent Infill Drill Program include:

Selected composited highlights from the recent Extension Drill Program include:

"The Infill Drill Program successfully infilled specific portions of the EG Gold System that were identified for development in the 2018 Preliminary Economic Assessment and intersected gold mineralization with grade and widths consistent with those encountered during earlier drill programs. It is anticipated that the density of drilling will upgrade these areas of the resource to the Indicated category and will be able to be included in the upcoming mineral resource update. In addition to these results, the Extension Drill Program successfully demonstrated that the Goldboro Deposit continues eastward at least 375 metres beyond the previous geological modelling. These drill results will likewise be used to model the deposit eastward and will be included in a resource update. Anaconda has completed 15,837 metres of diamond drilling since July of 2018 which will be included in the new resource update and published in a Feasibility Study expected to be completed in the fourth quarter of 2019. "

The Infill Drill Program intersected high-grade, mineralized gold zones as predicted by the geological model and is expected to upgrade resource categorization in this area of the EG Gold System (Exhibit A and B), which was part of the mining scenario outlined in the Company's 2018 Preliminary Economic Assessment. The Infill Drill Program also demonstrated the continuity of mineralization in the EG Gold System where it intersected 10 instances of visible gold.

The Extension Drill Program extended the strike of the Goldboro Deposit eastward by 375 metres from the 2018 resource model limit (Exhibit A and C), encountering typical high-grade mineralization. In addition to extending the deposit strike, the Extension Drill Program identified 15 new mineralized zones in total and encountered 14 instances of visible gold. The EG Gold System now contains 26 separate mineralized zones (15 more than the 2018 resource model), has been tested to a known depth of 400 metres, and remains open for expansion.

Anaconda also intersected strong concentrations of high-grade mineralization (e.g. 27.12 g/t gold over 2.5 metres in hole BR-19-97) contiguous with other high-grade gold intercepts previously reported on February 28, 2019, which included 25.07 g/t gold over 1.5 metres (Exhibit C). These intercepts are located approximately 150 metres up plunge from another high-grade result of 215.74 g/t gold over 3.65 metres as previously reported from historical drilling. These results indicate there may be high-grade chutes located along the south dipping limb of the host fold structure within the EG Gold System (Exhibit C), which are common in other areas of the Goldboro Deposit. Several of these intercepts are less than 75 metres from surface and will be evaluated for open-pit potential as part of the on-going feasibility study.

Selected composited highlights from historic and previously reported drill results in the immediate area of the Infill and Extension Drill Programs include:

A table of selected composited assays from the Infill Drill Program reported in this press release:

A table of selected composited assays from the Extension Drill Program reported in this press release:

No significant composites were noted from hole BR-19-72.

As part of the drilling announced in February 28, 2019, Anaconda has completed an additional 740 metres of drilling in 6 diamond drill holes (BR-19-98 and BR-19-100 to BR-19-104) near the center of the Goldboro deposit. These holes were drilled to infill specific portions of the Goldboro Deposit that required more drilling as identified by the ongoing resource update. Results from these six drill holes will be released upon receipt of the final assays.

Samples analyzing greater than 0.5 g/t Au via 30 g fire assay were re-analyzed at Eastern via total pulp metallic. For the total pulp metallic analysis, the entire sample is crushed to -10mesh and pulverized to 95% -150mesh. The total sample is then weighed and screened to 150mesh. The +150-mesh fraction is fire assayed for Au, and a 30 g subsample of the -150mesh fraction analyzed via fire assay. A weighted average gold grade is calculated for the final reportable gold grade. Anaconda considers total pulp metallic analysis to be more representative than 30 g fire assay in coarse gold systems such as the Goldboro Deposit.

Anaconda is a TSX and OTCQX-listed gold mining, development, and exploration company, focused in Atlantic Canada. The company operates mining and milling operations in the prolific Baie Verte Mining District of Newfoundland which includes the fully-permitted Pine Cove Mill, tailings facility and deep-water port, as well as ~11,000 hectares of highly prospective mineral lands including those adjacent to the past producing, high-grade Nugget Pond Mine at its Tilt Cove Gold Project. Anaconda is also developing the Goldboro Gold Project in Nova Scotia, a high-grade resource and the subject of an on-going feasibility study.