TORONTO, July 18, 2019 /CNW/ - Anaconda Mining Inc. ("Anaconda" or the "Company") (TSX: ANX) (OTCQX: ANXGF) is pleased to announce results from nine short diamond drill holes (BR-19-77 to BR-19-85) drilled to test shallow portions of the East Goldbrook Gold System ("EG Gold System") at the Goldboro Gold Project in Nova Scotia ("Goldboro"). The 607 metres of diamond drilling were part of a larger, recently completed 5,000 metre diamond drill program announced on February 28, 2019 and were designed to test the up-plunge projection of five mineralized zones within the EG Gold System at vertical depths of less than 70 metres, and over a strike-length of approximately 100 metres (the "Drill Program") (Exhibit A and B). 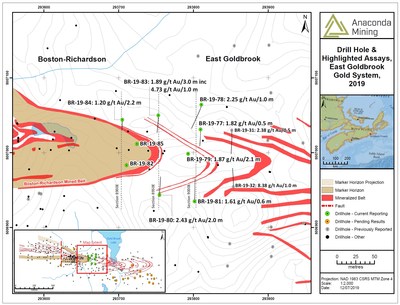 The results of the Drill Program are significant in combination with historical drill results because they occur immediately adjacent to the open-pit under evaluation as part of an on-going Goldboro feasibility study. The Drill Program extended the five mineralized zones to surface over the area of drilling and encountered three instances of visible gold.

"The current drill results were successful in expanding five mineralized zones to surface in an area where they were not previously known. Given the shallow depths and proximity of this area to an open pit currently being evaluated as part of the ongoing feasibility study at Goldboro, these results could be important to the pit evaluation and optimization of the Goldboro mine plan. With the recent closure of an equity financing we will be developing additional exploration plans to potentially further expand the Goldboro resource. The remaining results of the 5,000 metre program commenced in February will be released over the next few months"

Selected composited highlights from the recent Drill Program include:

Samples analyzing greater than 0.5 g/t Au via 30 g fire assay were re-analyzed at Eastern via total pulp metallic. For the total pulp metallic analysis, the entire sample is crushed to -10mesh and pulverized to 95% -150mesh. The total sample is then weighed and screened to 150mesh. The +150mesh fraction is fire assayed for Au, and a 30 g subsample of the -150mesh fraction analyzed via fire assay. A weighted average gold grade is calculated for the final reportable gold grade. Anaconda considers total pulp metallic analysis to be more representative than 30 g fire assay in coarse gold systems such as the Goldboro Deposit.

Anaconda is a TSX and OTCQX-listed gold mining, development, and exploration company, focused in Atlantic Canada. The company operates mining and milling operations in the prolific Baie Verte Mining District of Newfoundland which includes the fully-permitted Pine Cove Mill, tailings facility and deep-water port, as well as ~11,000 hectares of highly prospective mineral lands including those adjacent to the past producing, high-grade Nugget Pond Mine at its Tilt Cove Gold Project. Anaconda is also developing the Goldboro Gold Project in Nova Scotia, a high-grade resource and the subject of an on-going feasibility study.