OTTAWA, May 1, 2018 /CNW/ - His Highness the Aga Khan arrived in Ottawa today as part of an international celebration of his Diamond Jubilee, marking 60 years as spiritual leader of the global Shia Ismaili Muslim community. The visit takes place at the invitation of the Government of Canada and includes an official dinner at Rideau Hall on May 2, hosted by Her Excellency the Right Honourable Julie Payette, the Governor General of Canada, meetings of the Global Centre for Pluralism; and community gatherings in Vancouver and Calgary. 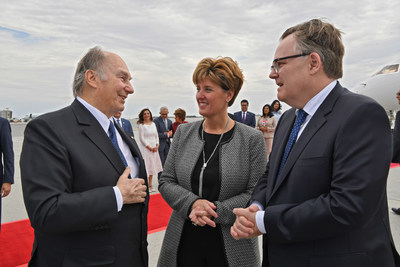 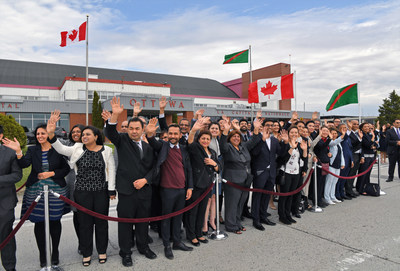 The visit is an acknowledgment of the strong relationships between the Aga Khan and Canada over the course of the past six decades.

"The Diamond Jubilee provides an opportunity for people everywhere, here in Canada and elsewhere, to re-dedicate themselves to the ethics and values that underpin our partnerships with communities around the world to help improve quality of life. It is an opportunity to give back and look forward," said Mahmoud Eboo, Aga Khan Development Network (AKDN) Representative to Canada.

Remarking on the importance of this visit, Malik Talib, President of the Ismaili Council for Canada added that the visit was "an opportunity to celebrate the deep and lasting relationships he has built with Canadian institutions over his 60 years of service and to recognize the contributions of Ismaili Canadians from coast to coast."

The Aga Khan was greeted on arrival by the Honourable Marie-Claude Bibeau, Minister of International Development and La Francophonie; Marc-André Blanchard, Ambassador and Permanent Representative of Canada to the United Nations; various members of Parliament and other civil society leaders.

The Aga Khan is an honourary Canadian citizen and Companion of the Order of Canada, and in February 2014, became the first faith leader to address the Canadian Parliament. He has partnered with Canadians institutions and governments on a wide variety of projects in Canada and globally to promote inclusive, sustainable development and improve quality of life.

"So many Canadians across the country have strong affinity and engagement with the Aga Khan's institutions and the causes he champions, including a commitment to pluralism," said Khalil Shariff, CEO of Aga Khan Foundation Canada. "These partnerships have improved the lives of millions around the world and continue to promote our shared Canadian values of humanitarianism."

The lasting collaboration between Canadians and the Aga Khan is rooted in what His Highness has called "a remarkable convergence of values," embodied in a mutual dedication towards improving the condition of society's most vulnerable, and a respect for diversity and human dignity.

On July 11, 1957, the Aga Khan became the 49th hereditary spiritual leader (Imam) of the Shia Ismaili Muslims. In Islam's ethical tradition, religious leaders not only interpret the faith but also have a responsibility to improve the quality of life of their community and the wider societies in which they live.

One way in which the Aga Khan has chosen to do this is through the establishment of the Aga Khan Development Network, a group of private, non-denominational agencies that address the social, economic, and cultural dimensions of development in 30 countries around the world.

July 2017 marked the 60th anniversary, or Diamond Jubilee, of the Aga Khan's spiritual leadership of the Ismaili community. Historically, the Ismaili Imams have used jubilees as opportunities to create institutions and initiatives that have lasting social, economic, and cultural impact.

In November 2017, the Aga Khan launched the Global Pluralism Award – a Diamond Jubilee initiative recognizing people and organizations of all nationalities that contribute to building societies where human diversity is respected and valued. The Award is presented by the Global Centre for Pluralism, an organization established by the Aga Khan in partnership with the Government of Canada to advance positive responses to the challenge of living peacefully and productively together in diverse societies.

Imamat initiatives in Canada include the Delegation of the Ismaili Imamat in Ottawa, the Aga Khan Foundation Canada, Ismaili Centres in Burnaby and Toronto, and the Aga Khan Museum and Park in Toronto. The Aga Khan Garden will open later this year at the University of Alberta in Edmonton.

In recognition of his contributions to human development and improving the condition of societies globally, the Aga Khan has received numerous decorations, honorary degrees, and awards from Canadian institutions, including honorary doctorates from McGill and McMaster Universities, the University of Alberta, the University of Ottawa, and the Pontifical Institute of Medieval Studies at the University of Toronto.

To learn more about these initiatives, please visit: www.akdn.org/canadavisit