VANCOUVER, March 7, 2019 /CNW/ - Advantage Lithium Corp. (the "Company" or "Advantage Lithium") (TSX Venture: AAL) (OTCQX: AVLIF) is pleased to announce that the updated resource estimate for the Company's flagship Cauchari Project in Jujuy, Argentina has more than doubled from the previous resource announced in May 2018, making the project the second largest development project in Argentina (based on NI 43-101 compliant M&I resources only). 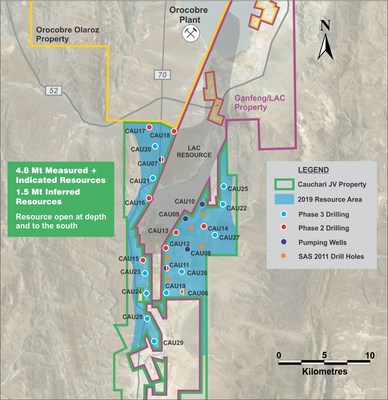 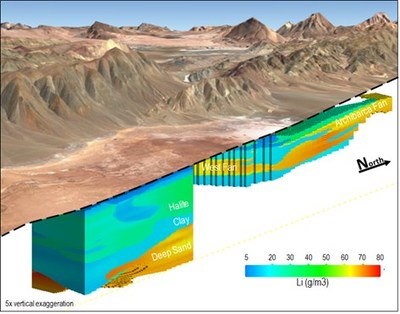 David Sidoo, the Founder and CEO of Advantage Lithium, commented on the significant resource expansion at the Cauchari Project: "We were delighted when the Phase II drilling program delivered the 3Mt resource in May 2018 but the subsequent Phase III drilling has delivered significant additional resources to the project, doubling the resource size. It positions the Cauchari JV as the second largest undeveloped lithium project in Argentina, based on the project M+I Resources (without considering the Inferred resources). This is a fantastic result for the Company and allows us to reassess the future production capacity for the project in order to maximise value for our shareholders."

The Company intends to submit a full technical report within 45 days of this filing, in accordance with the requirements of National Instrument 43-101 (NI 43-101) to support the conclusions presented here.

The drilling program has expanded the resource at the Cauchari Project to 4.8 Mt of LCE of Measured+Indicated Resources contained in 1.8 km3 of brine and 1.5 Mt of Inferred Resources contained in 0.6 km3 of brine. The resources have been broken into six different geological units which are classified between Measured, Indicated and Inferred resources, with the classification reflecting differences in the level of available sample information. The resource estimate is presented in Table 1 below.

The key areas of the resource for future brine production are the Archibarca Fan and the SE Sector of the Project. The Archibarca Fan resource consists of 1.0 Mt of LCE as Measured Resources at 564 mg/l lithium. The Measured and Indicated Resources in the SE Sector, mostly contained in the Clay and Halite units, amount to approximately 3 Mt of LCE at 481 mg/l lithium. The extraction characteristics of the Archibarca Fan and SE Sector have been confirmed by the 30 day pumping tests in each area during the Phase III Program in 2018.

Andy Robb, VP Project Development commented: "The resource expansion is an outstanding result for the Company, providing the opportunity to assess the possibility of expanding the future production rate for the project to 25 ktpa. The resource remains open at depth with extensive Deep Sand encountered in phase III drilling."

The brine resource is calculated over the western and eastern properties of the Cauchari project and covers an area of 117.7 km2. The brine resource in the west extends from the brine level below the surficial gravels to a depth of over 400 m and is classified as Measured in the north in the Archibarca area and Indicated further south in the West Fan, with small volumes of Inferred resources in these areas. The Measured and Indicated Resources in the east extend from the phreatic brine level to a constant depth of 400 m in the Halite and Clay units. Indicated Resources in the Deep Sand unit extend to 500 m depth. Below these depths the resource is classified as Inferred, reaching a depth of up to 619 m. The Deep Sand unit remains open at depth. None of the drill holes completed to date have intercepted bedrock (basement) and the resource remains open at depth.

The updated lithium resource estimate for the Cauchari Project is based on the results of 26 diamond holes and five rotary holes drilled between 2011 and the end of 2018. Figure 1 shows a location map of the drill holes completed during the 2011 and 2017/8 drilling campaigns and Figure 2 shows a cut-away diagram of the resource area and concentrations. Brine sample collection consisted of bailed and packer samples in the diamond holes, and packer and pumped samples in the rotary holes. More than 2,000 brine samples (including more than 300 QA/QC samples) were analyzed by Norlabs (Jujuy, Argentina) as the primary laboratory and by Alex Steward Assayers (Mendoza, Argentina) and the University of Antofagasta (Chile) as secondary QA/QC laboratories. Brine was also extracted from diamond cores (centrifuge methodology) in an independent laboratory in the USA and analysed in the Norlabs laboratory to further verify and validate brine chemistry results.

HQ core was retrieved during the diamond core drilling from which more than 300 primary undisturbed samples were prepared for laboratory drainable porosity and other physical parameter determinations by Geo Systems Analysis (GSA) in Tucson, AZ. Laboratory QA/QC porosity analyses were undertaken by the DBS&A Laboratory, Core Laboratories and the British Geological Survey.

The lithium resource was estimated using SGEMs software applying ordinary kriging. The resource estimate was prepared in accordance with the guidelines of National Instrument 43-101 and uses best practice methods specific to brine resources, including a reliance on core drilling and sampling methods that yield depth-specific chemistry and drainable porosity measurements. The resource estimation was completed by independent qualified person Mr. Frits Reidel of Santiago based hydrogeology firm FloSolutions with extensive experience in the estimation of lithium brine resources in Argentina.

The technical information in this news release has been reviewed and approved on behalf of the Company by Mr Frits Reidel, a "Qualified Person" as defined in NI 43-101. Full details of the drilling results, resource estimation methodology and quality assurance/quality control will be provided in the associated NI 43-101 technical report.

Further information about the Company can be found at www.advantagelithium.com.