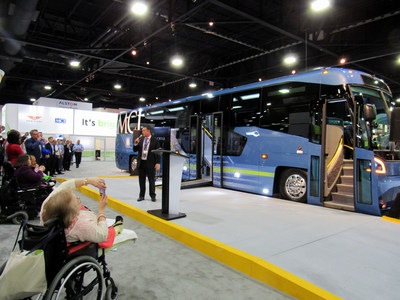 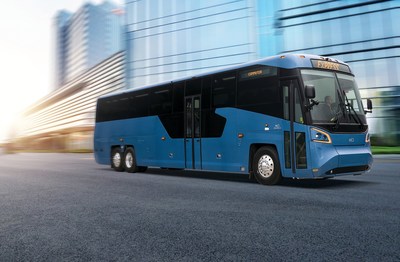 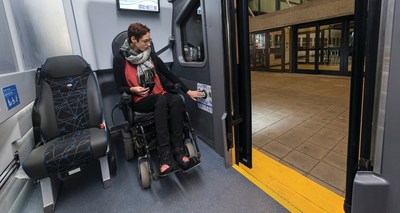 MCI, whose Commuter Coach model is already North America's most popular and a prominent staple in fleets serving commuter routes, chose APTA EXPO 2017 taking place in Atlanta to unveil the all new, next generation model, as communities nationwide consider CRT an effective way to respond to commuter tastes and investment objectives in expanding transportation systems.

Deliveries of the Buy-America compliant, Altoona-tested clean-diesel coach are expected to begin in the fourth quarter of 2018. An all-electric version is also in development and will be released in 2020.

"We consider the MCI D45 CRT LE a landmark vehicle on three fronts," explains MCI President Ian Smart. "First, the model launches a boldly progressive modern design along with the amenities and comfort necessary to getting commuters to switch from commuting by car. It's important that this is a coach where people want to try commuter travel. Second, we are looking ahead to a more diverse society where different groups of citizens will face a range of mobility issues, and we believe the MCI D45 CRT LE is part of the solution. We listened to what our customers wanted and created a coach like no other with a low entry vestibule that vastly improves dwell times, and the overall passenger experience."

"Finally, we're very proud to be rolling out a 100% electric version because it becomes the most accessible and environmentally-friendly vehicle we've ever created," Smart said.

According to Brent Maitland, MCI's Vice President of Marketing and Product Planning, "We immersed ourselves in the user experience when designing this coach, seeking the input of a broad range of passengers including users of mobility devices. Their participation guided our low floor entry and vestibule design, and our engineers worked closely with Designworks on the overall styling for it to be an alluring progressive vehicle in the fleets that operate rapid commuter transit. Designed for the highway, it is a versatile, comfortable, transportation solution for regional communities looking to provide the best solution for all their transit users, now and in the future."

The CRT LE low level entry vestibule accessible by a second door at the midpoint of the coach includes seating for five passengers, allowing for up to two secured mobility devices and an attendant. The model offers a high-capacity 54-passenger seating configuration overall, with seating for 52 when there are two passengers using a mobility device.

"We focused on accessibility, riding and exit experience from the passenger perspective, mapping the journey from waiting to board, entering the coach, securing and exiting," said Maitland. "It's some of the most comprehensive user testing we've ever done. We are grateful to our participants for their time, feedback, evaluation and design acceptance."

More about the electric CRT LE

MCI will offer an all all-electric D45 CRT LE with an efficient energy storage and battery thermal management systems driving its motor and control systems, air compressor, HVAC, and all driver controls. Orders will be taken starting next year.

The all-electric model will utilize a high-torque Siemens 2130 LB FT electric drive system for operation at highway speeds with a planned range to meet long-distance commuter applications, currently up to 480 KAs for charging, the vehicle allows for high power plug-in battery EV charging to 100 percent in under three hours.

"Battery technology and performance improves seemingly every day. Each agency has its own range requirement and charging strategy," said Tom Wagner, MCI Vice President of Public Sector.  "As New Flyer, our sibling under the NFI Group, is already an experienced manufacturer in electric vehicle technology, MCI can rapidly become the leader in 100% electric coach technology."

While MCI has its roots in the tour and charter business, MCI lore suggests that the first transit use of its coaches goes back to 1965 and Gray Coach in Canada, which was eventually absorbed by Ontario's GO Transit agency. At about the same time in the U.S., Chautauqua Transit purchased an MC-5A, and 10 MC-7s were delivered to Vermont Transit in 1969. Other transit systems soon followed.

By 1991, many more U.S. regional transit authorities were created, and many of those were expanding to connect suburban communities, office parks and park-and-ride operations, and the energy crisis forced commuters to rethink their automobile usage, the MCI Commuter Coach business grew.

Accessibility has also been a factor in MCI's transit history – as early as 1984 MCI became the first manufacturer to introduce a wheelchair-lift model, at least six years before the Americans With Disabilities Act went into effect.

Patrick Scully, MCI Executive Vice President of Sales and Marketing, added: "We've made history in this business while becoming an important partner to public transportation agencies large and small throughout North America. We are very proud of the CRT LE and expect it to be one of our most evolutionary vehicles as we serve a changing commuter public."

NFI Group is the largest transit bus and motor coach manufacturer and parts distributor in North America, with 31 fabrication, manufacturing, distribution, and service centers across Canada and the U.S. employing over 5,800 team members.

Further information is available on NFI Group websites at www.newflyer.com and www.mcicoach.com. The common shares of the NFI Group are traded on the Toronto Stock Exchange under the symbol NFI.