MISSISSAUGA, ON, July 12, 2018 /CNW/ - Price appreciation in the second quarter of 2018 showed a marked improvement over Q1 figures, with the average price of a single-detached home in the Greater Toronto Area (GTA) on par or climbing in 75 per cent of Toronto Real Estate Board (TREB) districts, according to a report released today by RE/MAX INTEGRA Ontario-Atlantic Region. 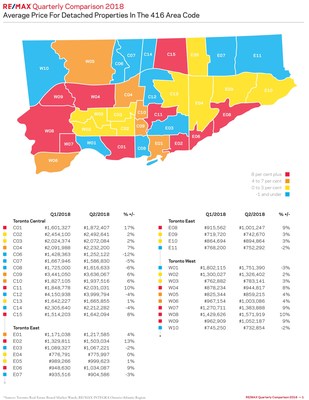 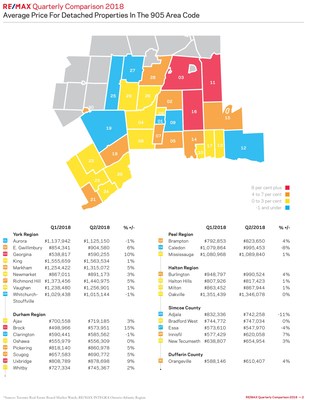 "While the stellar performance of the GTA's condominium sector captured headlines throughout much of the year, detached housing sales and prices were quietly making a comeback," says Christopher Alexander, Executive Vice President and Regional Director, RE/MAX INTEGRA, Ontario-Atlantic Region. "Second-quarter detached housing numbers from both a price and sales perspective suggest that the market has shifted yet again, with momentum building as homebuyers flex their muscles."

The top-performing markets in terms of price appreciation experienced double-digit growth in Q2. Led by Palmerston-Little Italy, Trinity-Bellwoods, Niagara and the waterfront communities (C01) in the 416, values rose 17 per cent from $1,601,327 in the first quarter to $1,872,407 in the second quarter. Homes in the sought-after downtown core are typically sold at a sale-to-list-price ratio of 107 per cent within eight days on market.

To the East, Brock posted a 15-per-cent increase in average price. Values in the Beach (E02) experienced a 13-per-cent uptick, while Edenbridge-Humber Valley, Kingsway South, Princess Rosethorn and Islington City Centre West (W08) rose 10 per cent in the second quarter, compared to the first. Georgina – a community on the shores of Lake Simcoe— rounded out the top five, jumping 10 per cent.

Home-buying activity was also on the upswing in the second quarter of the year, with 97 per cent of districts reporting an increase in sales volume between Q1 and Q2 2018. The neighbourhoods of Lawrence Park North and South, Bedford Park-Nortown and Forest Hill North – comprising the North Toronto neighbourhood of C04 – were clear frontrunners in the second quarter, with sales almost tripling first quarter levels. Between April and June, 173 homes changed hands, up 193 per cent from the first three months of the year.

Mississauga placed second with a 122-per-cent increase in detached sales in the second quarter, compared to Q1, followed by Caledon with an upswing of 121 per cent. Yonge-St. Clair, the Annex, University and Wychwood (C02) ranked fourth, with a percentage increase of 118 per cent, while Highland Creek, Centennial, West Hill and the Rouge (E10), placed fifth at 116 per cent.

Greater affordability provided a much-needed break for homebuyers in the Greater Toronto Area in 2018, with year-over-year prices falling short of 2017 levels in many areas. "Buying opportunities continue to exist as a result in neighbourhoods throughout the 416 and 905 area codes," explains Alexander. "But the window is starting to close, with detached housing sales and values climbing."

"The GTA's detached housing market has clearly stabilized after a rocky 12-month period," says Alexander. "The frenzied home-buying activity of 2016/2017 is behind us. The new normal for Toronto and the surrounding communities is a relatively balanced housing market, with supply meeting demand. Given current economic fundamentals, we expect continued upward pressure on detached housing values throughout the remainder of the year."

About the RE/MAX Network:RE/MAX was founded in 1973 by Dave and Gail Liniger, with an innovative, entrepreneurial culture affording its agents and franchisees the flexibility to operate their businesses with great independence. Over 120,000 agents provide RE/MAX a global reach of more than 100 countries and territories. RE/MAX is Canada's leading real estate organization with more than 20,000 Sales Associates and over 900 independently owned and operated offices nationwide. RE/MAX, LLC, one of the world's leading franchisors of real estate brokerage services, is a subsidiary of RE/MAX Holdings, Inc. (NYSE: RMAX). With a passion for the communities in which its agents live and work, RE/MAX is proud to have raised millions of dollars for Children's Miracle Network Hospitals® and other charities. For more information about RE/MAX, to search home listings or find an agent in your community, please visit www.remax.ca.

About RE/MAX INTEGRA and RE/MAX INTEGRA, Ontario-Atlantic CanadaRE/MAX INTEGRA, founded in 1980, is a privately held company by Canadian entrepreneurs. With regional headquarters in Toronto, Boston, Minneapolis, Indianapolis, Zug, and Vienna, RE/MAX INTEGRA represents nearly a third of all RE/MAX Sales Associates worldwide. The company was founded on the premise of providing outstanding service and support both at the regional level and to the end consumer. The Ontario-Atlantic Canada region has surpassed 10,000 quality Associates; The US regions — New England and the Midwest (including the following states: Minnesota, Wisconsin and Indiana) – account for more than 6,500 Associates with over 2,600 and 3,800 Associates respectively; and the European region leads with more than 16,000 Associates. For more information about RE/MAX INTEGRA, visit www.remaxintegra.com